After a two-week break, the Road to the Breeders’ Cup resumes on Saturday with a significant prep at the Jersey Shore anchoring the weekend's stakes activity, which has been adjusted somewhat compared with previous years due to changing track schedules in light of the COVID-19 pandemic.

The $1 million, Grade 1 TVG.com Haskell Stakes at Monmouth Park is annually a key event in determining standings in the 3-year-old dirt male division, and that’s especially true this summer since for the first time in history it serves as a qualifying points prep for the Kentucky Derby Presented by Woodford Reserve, which is rescheduled for Sept. 5 at Churchill Downs.

The 53rd Haskell Invitational also offers a fees-paid automatic berth to Longines Breeders' Cup Classic Nov. 7 at Keeneland as it’s part of the “Win and You’re In” Challenge Series Presented by America’s Best Racing. The Haskell will be broadcast nationally on NBC as part of an hour-long show beginning at 5 p.m. ET on Saturday. For more information on television coverage, click here.

Here’s some background on the Haskell and several other stakes races on tap this weekend that have been historically important on the road to the Breeders' Cup World Championships:

As a race restricted to 3-year-olds, the Haskell Invitational has not had a year-in, year-out impact on the Breeders’ Cup Classic since the World Championships began in 1984, but in certain years – especially when a strong crop of sophomores emerges – the Haskell has been a key prep race. In 1988, Haskell winner Forty Niner finished fourth in that fall’s Breeders’ Cup Classic, but runner-up Seeking the Gold made a bigger splash, fighting valiantly in deep stretch before yielding to eventual Horse of the Year Alysheba in the final strides to finish second. Serena’s Song became the first filly to win the Haskell in 1995; she competed in the ’95 and ’96 Breeders’ Cup Distaffs, finishing second in the latter year. Another eventual Hall of Famer, Skip Away, won the 1996 Haskell en route to champion 3-year-old male honors, and then romped in the 1997 Breeders’ Cup Classic to win another championship, this time as champion older male. He then went on to earn Horse of the Year and champion older male honors in 1998.

In 1999, Haskell runner-up Cat Thief posted a 19.60-1 upset in the Breeders’ Cup Classic under Pat Day, but after that, there was little crossover of note between the two races until 2007. That year was a banner one for 3-year-olds racing on dirt, and the top three finishers in the Haskell Invitational all started in the Breeders’ Cup Classic, which was held at the home of the Haskell, Monmouth Park. By that point, Curlin had emerged from his third-place effort in the Haskell to become the dominant racehorse in his class, and he validated that reputation with a 4 ½-length romp in the Classic. Haskell runner-up Hard Spun settled for second again in the Classic, while Haskell winner Any Given Saturday was sixth.

More recently, the Haskell’s profile has been elevated as a Breeders’ Cup Classic prep race (it became part of the Challenge Series in 2015). In 2014, Bayern, the seventh of Bob Baffert’s record eight Haskell winners, scored a front-running upset in the Classic at Santa Anita that survived a steward’s inquiry. And one year later, Baffert-trained Triple Crown winner American Pharoah easily won the Haskell, suffered a shocking upset in the Travers Stakes, and then returned to achieve Grand Slam glory by closing out his career with a blowout Breeders’ Cup Classic win at Keeneland.

There are several other graded stakes this weekend that are not “Win and You’re In” qualifiers but still have had an impact on the Breeders’ Cup in past years. Most prominent among them is Saturday’s Grade 1 Coaching Club American Oaks at Saratoga. Much like the Haskell, the CCA Oaks is rich in history and has crossed paths with the Breeders’ Cup World Championships in unique years when either a 2-year-old champion trained on to win the race at 3 or a 3-year-old filly took the CCA Oaks and made noise in the Longines Breeders' Cup Distaff later that same year or even farther along in her career. Hall of Famer Open Mind falls into the first category, winning the Breeders’ Cup Juvenile Fillies in 1988 and the CCA Oaks in ’89 (she would finish third in the ’89 Distaff). My Flag would capture the Juvenile Fillies-CCA Oaks double in 1995-96. And the great Songbird would do the same in 2015 and 2016 (and subsequently lose the 2016 Longines Distaff in an absolute heartbreaker to Beholder).

A more common case through the years has occurred when the CCA Oaks winner progressed to either win the Longines Distaff or to come tantalizingly close (à la Songbird). Goodbye Halo won the CCA Oaks in 1988 and nearly won the Distaff later that year as a 3-year-old, finishing third by less than a length. In 1997, Allen Paulson’s Ajina became the first 3-year-old filly to win both the CCA Oaks and the Distaff, taking both races easily to cinch an Eclipse Award as champion sophomore filly. Banshee Breeze nearly pulled off the same double a year later, losing the Distaff by a nose to Escena (Banshee Breeze also finished second in the ’99 Distaff). And in 2004, Ashado won both races for Jack Wolf’s Starlight Stables and partners. Ashado, who finished second in the ’03 Juvenile Fillies and third in the ’05 Distaff, won two Eclipse Awards during her stellar career (champion 3-year-old filly in ’04, champion older female in ’05) and was voted into the Racing Hall of Fame in 2014.

In 2007, Octave won the CCA Oaks and finished third in the Distaff, beaten by a half-length. It’s Tricky won the 2011 CCA Oaks and was runner-up to multiple champion Royal Delta in the Ladies' Classic, as the Distaff was briefly renamed. Stopchargingmaria won the CCA Oaks at age 3 in 2014 and in 2015 at age 4 scored at 7.10-1 odds by a neck over Stellar Wind in the Longines Distaff at Keeneland. And Abel Tasman defeated Elate by a head in the 2017 CCA Oaks, only to come up short to Forever Unbridled by a half-length the Longines Distaff at Del Mar (she won the Eclipse Award as champion 3-year-old filly anyway). 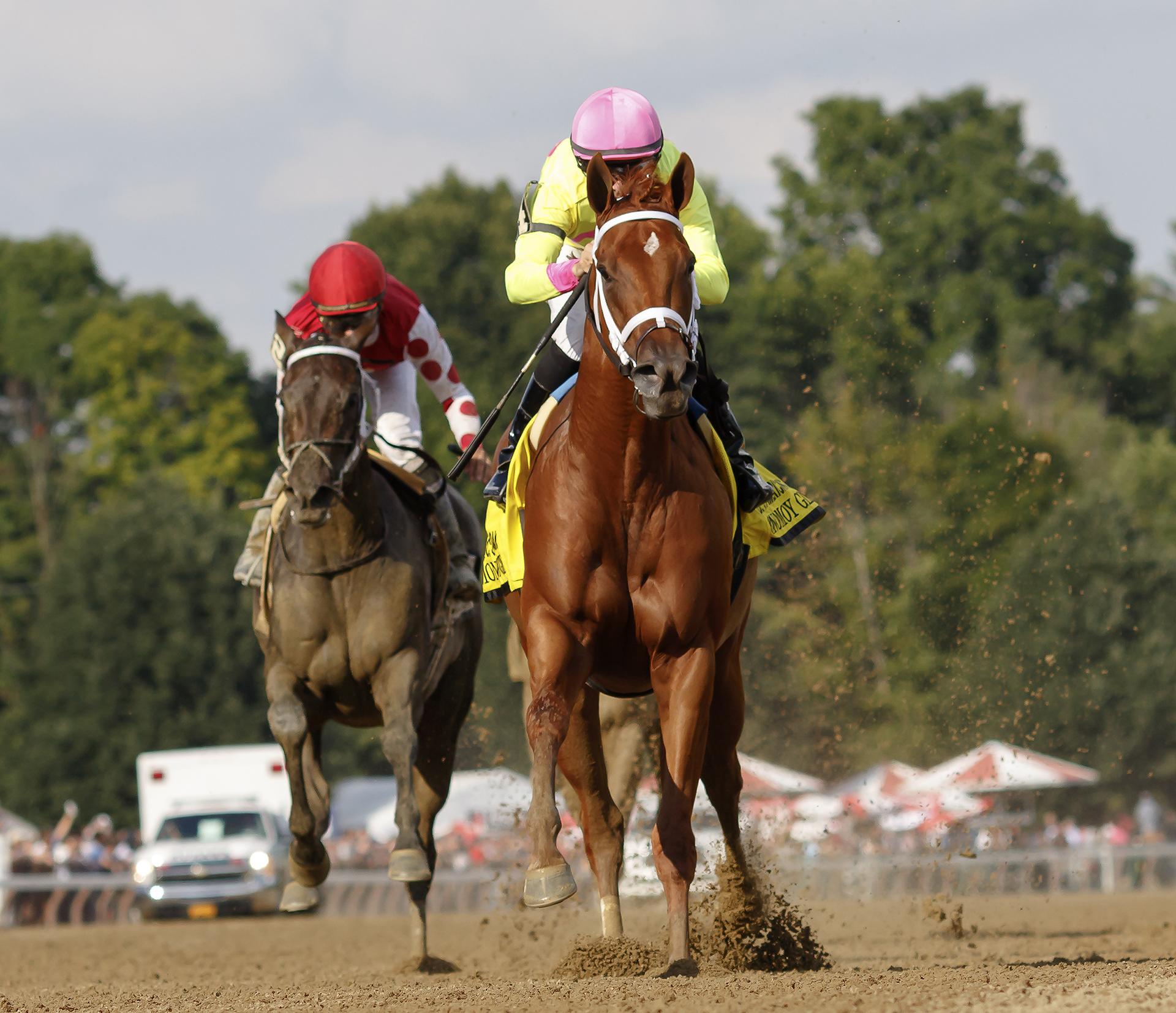 In 2018, Monomoy Girl became the third 3-year-old filly to win the CCA Oaks and the Longines Distaff during the same year, capping off a 6-for-7 campaign marred only by a loss via disqualification in the Cotillion Stakes. After missing more than a year and a half due to colic, she is on the comeback trail this year with two consecutive wins, including the Ruffian Stakes last Saturday, and is targeting the Nov. 6 Longines Distaff at Keeneland. There, she could meet the 2019 CCA Oaks winner Guarana. That filly is also 2-for-2 this year, including last Saturday’s Beaumont Stakes.

The Grade 2 San Diego Handicap at Del Mar has been won by several accomplished and famous horses through the years (and has had also-rans such as Breeders' Cup winners Pleasantly Perfect and Bayakoa), and through the years it has become an increasingly important race on the road to the Breeders’ Cup as the main prep for the Grade 1 TVG Pacific Classic at Del Mar in August.

The first San Diego winner to make noise at the World Championships came early. Skywalker, a son of Relaunch based in California, won the San Diego in summer 1986 and three starts later at Santa Anita upset the Classic at odds of 10.10-1 under Laffit Pincay Jr., defeating the top two betting choices, Turkoman and Precisionist.

Rail Trip won the San Diego in 2012 and finished second in the Dirt Mile, and the race's stature has continued to grow larger as this decade has progressed. The great California Chrome won the San Diego Handicap in 2016 prior to his five-length runaway in the Pacific Classic, and he was favored in the Breeders’ Cup Classic that year only to lose to another superstar, Arrogate. In 2017, Accelerate upset Arrogate in the San Diego but finished ninth in the Dirt Mile that fall and did not reach champion-level form until 2018, when he won five Grade 1 stakes, including the Breeders’ Cup Classic.

Sunday’s Grade 2, 1 1/8-mile Eddie Read Stakes at Del Mar is one of the seaside track’s preeminent turf races for older horses, and has commingled with the Longines Breeders’ Cup Turf and Breeders’ Cup Mile on occasion. In 1993, Richard Mandella-trained grass sensation Kotashaan won the Eddie Read and the Breeders’ Cup Turf as part of a campaign that netted him not only an Eclipse Award as champion turf male, but also as Horse of the Year.

Fastness won back-to-back Eddie Reads in 1995 and 1996 and finished second to England-based Ridgewood Pearl in the ’95 Mile, and Aragorn took the ’06 Eddie Read three starts before finishing second to upset winner Miesque’s Approval in the Mile. Midnight Storm won the 2016 Eddie Read and finished a good third in that year’s Mile, but perhaps the best performance in the Mile by an Eddie Read winner came in 2018, when Catapult came up a half-length short to European invader Expert Eye in the Mile at Churchill Downs.

Other stakes this weekend with recent influence on the Breeders’ Cup include the Molly Pitcher Stakes at Monmouth, won back-to-back in 2007 and ’08 by Hystericalady, who just missed winning the ’07 Distaff at the same track, and won by eventual Distaff runner-up and current divisional standout Midnight Bisou last year; the Royal North Stakes at Woodbine, won in 2016 by elite turf sprinter Lady Shipman, who had missed winning the 2015 Breeders’ Cup Turf Sprint by a neck; and the Monmouth Cup Stakes, won in 2017 by Sharp Azteca, the eventual runner-up in that year's Breeders’ Cup Dirt Mile.